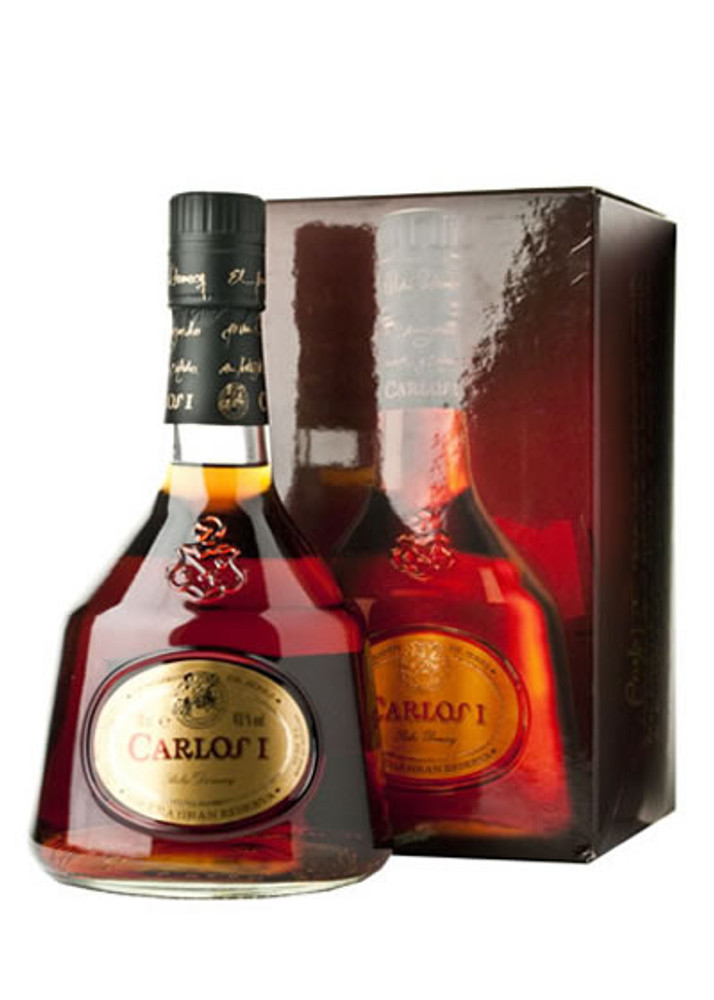 "An XO brandy from Jerez, Spain. It's made using a solera system that's been going for a hundred years! In theory, a tiny amount of the brandy will be this old as the casks are never fully emptied, just topped up from the next oldest cask." -Producer

I typically NEVER write evaluative comments anywhere for anything. However, this was such a pleasant and successful purchasing experience, I HAD to do something this time The Carlos Brandy (a gift for my son-in-law's 50th birthday and the ONLY brandy he has drunk for years) is not easily found anywhere in the USA, or it can be found, but subsequently not able to be shipped. I checked California and New York, Spain and England: no luck. Then I discovered The Liquor Barn (which happens to be in "my backyard" in the NW Chicago suburbs!! . . . so I phoned them). After a pleasant greeting, I was connected with a brandy expert (I think his name was Steven. It WAS in the morning of Monday, 8/27/20, if that helps to identify the employee.) He was extremely knowledgeable and was disappointed to have to tell me that he thought that that item was sold out at the time. But he pleasantly said he would go back to check anyway. After a short while, he returned with the happy news that he found 2 bottles and described them in detail to be sure that he had what I was looking for . . . and he DID. He told me to order it online and described their shipping protocols. He said it definitely would arrive before the weekend, the date of the birthday. I went back to the website, (which was exceptionally easy to traverse), ordered the brandy, immediately got confirmation of the purchase via email and, by afternoon, had info about delivery. I had planned to contact my son-in-law either Thursday or Friday to alert him of said delivery, which had to be signed for by someone over 21. I was SHOCKED to find out that the brandy was delivered on WEDNESDAY: just two days worth of shipping travel between Chicago and Harrisburg, PA. UNHEARD OF by businesses other than Amazon! So, if there was a 6th star for this review I would give it to this little business in the suburbs. From start to finish, it was an online (and one phone call!) shopping experience par excellence! I definitely will drive over to make my next liquor purchases there and I have spread the word to LOTS of people about this outstanding store which carries even hard-to-find, exceptional drinking options. Please patronize such a business that caters to customers so personally and perfectly. It's a rare find . . . just like some of its merchandise!