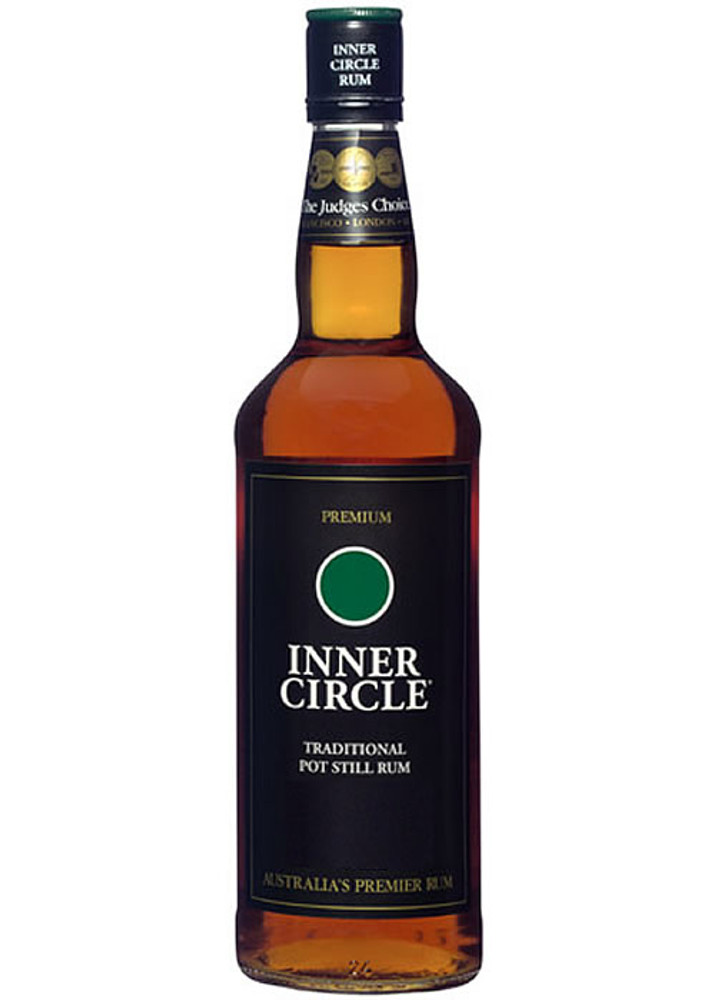 Inner Circle Rum was originally created by the Colonial Sugar Refinery in Australia last century for the pleasure of its own employees and their very special clients. It was to represent the pinnacle of the rum maker's art with only the finest ingredients ever to be used. It was, and remains today, a rum made from pot stills which gives it its distinctive, smooth characters. This Inner Circle Rum is made to those same exacting distilling and blending standards! The legend has now returned after nearly 16years and is available for the enjoyment of rum drinkers of the world! In July, 2002 at the International Wine and Spirit Competition held in London, Inner Circle Rums beat the world's best, taking the Trophy for the Best Rum in the Show, 1 Gold Medal, 2 Silver Medals and 2 Bronze Medals.

I had Inner Circle Rum when I went to Australia in 2009. I had only the Red Dot, Green Dot, and Black Dot versions. I did not know about the Blue Dot version. I have been searching online forever for Inner Circle Rum and this is the only place in the United States that carries it! You can get the Green Dot, Red Dot, and Black Dot rums online from international distributors, but after taxes and customs fees, it's about $80-$90 for a bottle! I have never heard of the Blue Dot and I never seen it or heard of it when I went to Australia (nor was there barely any info on it on google), so I emailed Vok Beverages, who bought out the Inner Circle Rum brand in 2012. I asked them about this rum and if it was real or if my leg was being pulled. This representative told me he called their master distiller at the Beenleigh, Queensland distillery (who has been working there for over 20 years), and he told me this guy said they did make it at one point (so it was real), but the last time he remembers them makin it was the early 2000's! He also said that this Blue Dot rum, which is actually called Inner Circle Royal Show Reserve Blue Dot, was only made for the United States and wasn't sold in Australia, which is why I never seen it heard of it when I went there in 2009. It was a special edition that was made for the United States for some kind of agreement they had. It has won many medals world wide and even took the gold medal at the San Fransisco International Spirits Competition in 2005, 2006, and 2007. 2007 I believe was the last year they made this. The 5 bottles I ordered from The Liquor Barn have a label around the neck stating all the awards it had won in theyear 2002. So considering that and that there bottles were stopped bein made in 2007, they have to be from between 2002 and 2007. And since they don't make it anymore and since The Liquor Barn is the only place on the internet that carry this (both in the United States and internationally), these bottles of the Blue Dot are the only bottles in existence now. Which is why I'm glad I bought 5. I have already drank 2 with friends and family and they all love it, so I will definitely be buying more before they are all gone, because The Liquor Barn only has a limited stock since it's not made anymore. This rum is the smoothest rum I have ever had and you can drink it straight or mix with just about anything, especially Coca Cola. And seeing that its 90 proof, the last bottles in the world, and only $30 a bottle after shipping, I'm suprised this rum isn't sold out or hasn't had more reviews. I'm hoping this review gets the word out about Inner Circle Rum. I don't know why the don't import it here to distributors, but they should start, I can guarantee anyone that tries it will want more. I talked to Vok Beverages and told them about a few large importers/distributors here in the United States (including The Liquor Barn) and they said they will talk to some higher ups and see if they can make some business happen, because they know it could do nothing except raise their profit margin of they dealt internationally. Best rum in the world! And The Liquor Barn, if you see this review, get a hold of Vok Beverages and talk to them about having them import their other Inner Circle Rum brands to you, because myself and many others I personally know would be lifetime customers if you could get a hold of it, and I'm sure many others would too once we start spreading the word about it!