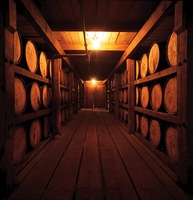 Whiskey is known as a delicious spirit that packs a punch, but few know about cask strength, otherwise known as barrel proof, whiskey. Cask strength refers to the heightened level of alcohol-by-volume (abv) of whiskey while it is stored in a cask for maturation. This number usually ranges from 60 to 65 percent abv. Cask strength is different from what you’re used to buying because most bottled whiskey is diluted with water to lower its abv.

Watering down bottled whiskey is a standard practice that makes it more affordable for distillers to produce while creating a product that is more palatable to the average consumers. What you pick up at the store is typically around 40 percent abv. Part of setting this abv number has to do with government regulation. Some countries set 40 percent abv as a statutory maximum while other set it as a statutory minimum.

Barrel proof whiskey usually comes at a premium price since it is more pure whiskey without being watered down (or watered only minimally to get it down to the mandated 60 or 65 percent proof). Lately, cask strength whiskey has been gaining popularity with Jack Daniels’ announcement of its new barrel proof whiskey, but this spirit style has been going strong for many years. In fact, many barrel proof whiskies are aged before going to market. You can get the following affordable, delicious barrel proof whiskies at The Liquor Barn, which are also ranked the best in the U.S. After all, you can always splash a little water to your liking into your rocks glass.

Elijah Craig makes a limited release of this small batch whiskey that is aged for 12 years. Elijah Craig Barrel Proof whiskey is made without chill filtering, which preserves natural flavors that are born during aging. This is a great bottle to give you the same taste that a Master Distiller gets when he or she tastes the whiskey directly from the barrel.

Stagg Jr. Barrel Proof bourbon doesn’t pack as much of a punch as the other brands, with a proof of only 128, which makes it a popular choice among whiskey appreciators looking to broaden their horizons and try barrel proof whiskey. This varies year over year, but can generally be counted on to be a great stepping-stone to the world of barrel proof whiskey.